Can I put multiple network segment in L2 switch?

Found a simple explanation to above question from http://www.howstuffworks.com/lan-switch11.htm. 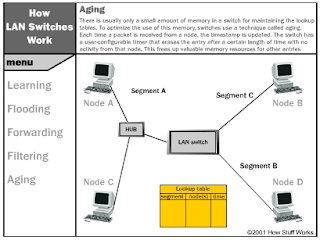 The switch gets the first packet of data from Node A. It reads the MAC address and saves it to the lookup table for Segment A. The switch now knows where to find Node A anytime a packet is addressed to it. This process is called learning.

Since the switch does not know where Node B is, it sends the packet to all of the segments except the one that it arrived on (Segment A). When a switch sends a packet out to all segments to find a specific node, it is called flooding.

Node B gets the packet and sends a packet back to Node A in acknowledgement.
The packet from Node B arrives at the switch. Now the switch can add the MAC address of Node B to the lookup table for Segment C. Since the switch already knows the address of Node A, it sends the packet directly to it. Because Node A is on a different segment than Node B, the switch must connect the two segments to send the packet. This is known as forwarding.

The next packet from Node A to Node B arrives at the switch. The switch now has the address of Node B, too, so it forwards the packet directly to Node B.

Node C sends information to the switch for Node A. The switch looks at the MAC address for Node C and adds it to the lookup table for Segment A. The switch already has the address for Node A and determines that both nodes are on the same segment, so it does not need to connect Segment A to another segment for the data to travel from Node C to Node A. Therefore, the switch will ignore packets traveling between nodes on the same segment. This is filtering.

Learning and flooding continue as the switch adds nodes to the lookup tables. Most switches have plenty of memory in a switch for maintaining the lookup tables; but to optimize the use of this memory, they still remove older information so that the switch doesn't waste time searching through stale addresses. To do this, switches use a technique called aging. Basically, when an entry is added to the lookup table for a node, it is given a timestamp. Each time a packet is received from a node, the timestamp is updated. The switch has a user-configurable timer that erases the entry after a certain amount of time with no activity from that node.

This frees up valuable memory resources for other entries. As you can see, transparent bridging is a great and essentially maintenance-free way to add and manage all the information a switch needs to do its job!
In our example, two nodes share segment A, while the switch creates independent segments for Node B and Node D. In an ideal LAN-switched network, every node would have its own segment. This would eliminate the possibility of collisions and also the need for filtering.
Email ThisBlogThis!Share to TwitterShare to FacebookShare to Pinterest